The Viking was built at Christen Christensen’s Framnes Shipyard in Sandefjord, Norway in 1892-93. It was copied after the ancient Viking ship Gokstad. Excavated in 1880, the Gokstad had been called the most beautiful ship ever built. 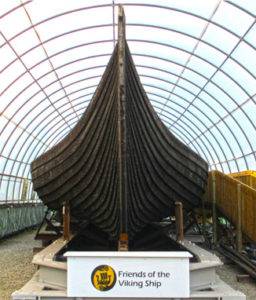 The Viking is approximately 78 feet long, 17 feet wide, and 6.5 feet high from the bottom of the keel to the gunwale. Clinker built, its planks are fastened together with thousands of iron rivets. At sea, the Viking averaged 10 knots and the hull was observed to flex with the waves.

In 1893 the Viking sailed from Norway to Chicago, via the Erie Canal and the Great Lakes, and became one of the greatest attractions at the World’s Columbian Exposition.

At the close of the Fair the Viking traveled to New Orleans. The next year she was returned to Chicago and presented to the Field Columbian Museum. Soon the Viking was in dry dock along side the Museum.

The Federation of Norwegian Women’s Societies saw her plight and began a restoration effort. After her repair and restoration the Viking was relocated to Lincoln Park in 1920, placed under a fenced-in, wooden shelter and transferred to the care of the Commissioners of Lincoln Park which later consolidated into the Chicago Park District.

The Committee consisted of individuals from various Scandinavian organizations. They raised funds through donations and began efforts to place the Viking ship inside the Museum of Science and Industry. Once close to success, their attempt failed.

In 1993 the Chicago Park District made it known that the Viking would have to be moved from its location to make room for expansion of the Lincoln Park Zoo. The General Superintendent of the Chicago Park District wrote to the Viking Ship Restoration Committee, requesting that the ship be cleaned, tarped and moved from Lincoln Park to proper storage. When the Viking Ship Restoration Committee did not respond to their letter, the General Superintendent sold the ship to the American Scandinavian Council in 1994.

The American Scandinavian Council assumed the obligation to display, repair and care for the ship within Chicago. The Council transported the Viking some 40+ miles to a materials yard in West Chicago and secured it under a canopy. Two years later the Viking was moved to Good Templar Park in Geneva, Illinois.

The American Scandinavian Council invested a portion of its money in blueprints and architectural plans for several possible locations. The Council came close to placing the Viking in its own museum, at one time on Chicago ‘s museum campus, and at another time near Navy Pier, but the attempts failed. In 2001 the Scandinavian-American Council ceased to exist before accomplishing its obligations.

Viking remains in Good Templar Park in Geneva, Illinois. The fabric canopy has been replaced several times. The dragon “head” and “tail” of the ship are in storage at the Museum of Science and Industry.

A ship this beautiful, which we also believe is the largest remaining artifact of the World’s Columbian Exposition in Illinois, deserves to be preserved. Viking should be valued for the fine ship she is and placed into a museum.

February 28, 2007, the Viking was declared one of ten most endangered historic sites in Illinois by “Landmarks Illinois”, a statewide historic preservation advocacy group.  Read MORE…

On November 10, 2007 the Viking received a $52,000 Partners in Preservation grant from American Express and the National Trust for Historic Preservation.  Read MORE…

On September 12, 2012 the Trusteeship of Viking was officially transferred from the Chicago Park District to Friends of the Viking Ship NPF in a courtroom signing of an agreed order.  Read MORE…

From 2013 through 2016, further stabilization efforts and exhibit improvements were made.  Read MORE…

1893, Sandefjord, Norway by Christen Christensen
The Viking is a 1/1 replica of the Gokstad ship.

Friends of the  Viking Ship, NFP

“the most beautiful ship ever built”

"Viking" Facts & Figures: “Viking” is made primarily out of oak. Like the Gokstad ship, she is approximately 78 feet long, 17 feet wide, and 6.5 feet high from the bottom of the keel to the gunwale. Based on these dimensions, she is what is known as a “Karvi” type of longship. The Karvi were considered to be the “general purpose” ships of the Viking era. They were a little wider and slower than a dragon warship, but with more capacity and safety—perhaps more suitable as a kind of royal yacht, or for fishing and trade, but occasionally used for military purposes.
… See MoreSee Less