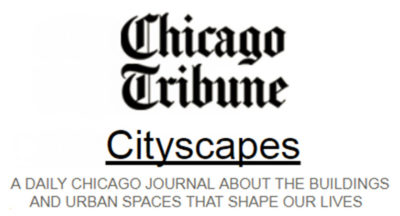 There was so much Olympics-related news last week that this one slipped through the cracks: The transformation of the Sears, Roebuck & Co. Power House, featured on this blog last month, won project of the year honors when Landmarks Illinois and the Richard H. Driehaus Foundation presented their annual statewide preservation awards on Saturday.

Also among the winners: the Preservation Partners of the Fox Valley, who have heroically rehabbed the once-threatened Viking ship from the 1893 World’s Columbian Exposition.

… The annual Richard H. Driehaus Foundation Preservation Awards ceremony honors individuals, organizations, projects and programs from across the state of Illinois, whose work demonstrates a commitment to excellence in historic preservation. The event is open to the public.

… A gift from Norway during the 1893 World’s Columbian Exposition, this Viking ship replica sailed across the Atlantic and served as a major attraction during the fair.

For many years, the ship was in dry dock in Chicago’s Lincoln Park Zoo but it was eventually relocated to its current site in Good Templar Park during the mid-1990s. After more than a century of exposure to the elements and numerous relocations, the ship was in need of a more permanent preservation solution.

In the winter of 2006-07, the Viking ship was named to both the Fox Valley and statewide lists of endangered historic resources. Soon afterwards, the ship was selected as one of 25 candidates to compete in the Chicagoland Partners in Preservation Grant challenge. Co-sponsored by American Express and the National Trust for Historic Preservation, the online voting process lasted four weeks and prompted a creative “Get out the Vote” campaign by this local grassroots organization.

Finishing in 2nd place, the Viking Ship stabilization effort was awarded 100% of the requested funds, which have been used to rebuild the structural support system, repair cracks in the wood, and provide a secure shelter and viewing platform for the vessel.

The jury remarked that “without the work of the Preservation Partners of the Fox Valley, the fate of this rare and invaluable historic resource would still be in jeopardy.”

July 1, 1858On this day, crew member Fredrik Oscar Frantsen (1858 – 1927) was born in Sandefjord, Norway, and became a sailor at the age of 14. He was steward on the "Viking” voyage and described as “one of the most important men on board ‘Viking’ as his functions are to satisfy the hunger of all the men.”
… See MoreSee Less