The misnomer Raven likely arose from a red, silk banner that flew over the ship showing the Viking symbol of a black raven with its wings outstretched. But the ship’s original name was indeed Viking, and here we have her Christening document as proof! 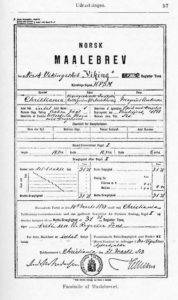 Captain Magnus Andersen later admitted that another name had been considered. He wrote that “it was proposed to the committee in charge of the ship that we call it the Leif Erikson, but we finally decided not to, as we did not want Americans to think us demonstrating; the Norwegian is modest.”