The ship was built in Sandefjord, Norway, and later christened Viking.

Captain Magnus Andersen and his crew 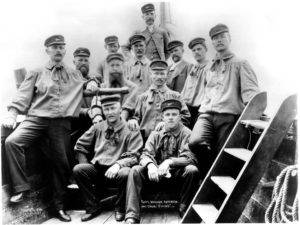 280 men applied to make the historic voyage, but only eleven were chosen. Crossing the north Atlantic was a brave experiment proving that Leif Erikson could have made the same crossing in AD1000.
Read about the only authenticated Viking settlement in North America HERE… and HERE…

The Viking ship in the Erie Canal.

The Viking ship arriving in Chicago.

From The Book of the Fair

“… as the approaching Columbian Exposition began to be the talk of the world, it was determined to send there her (Gokstad’s) counterpart, manned by Norwegian sailors and unattended by any other craft, in order to prove the feasibility of Leif Erikson’s alleged expedition, more than nine centuries ago, from Norway to the New England coast. Thus from Sandefjord the vessel, built by public subscription in the spring of 1893, set sail for New York, and in the middle of July anchored off Jackson park.”

The Viking is a replica of the Gokstad ship.

Excavated in 1880, the Gokstad was called the most beautiful ship ever built. 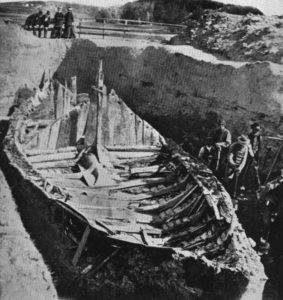 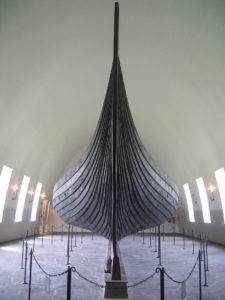 Of the Viking it was written…

“Her lines are remarkably beautiful, resembling those of a yacht, the convex curvature of the keel increasing her strength and steadiness of motion.”

The Book of the Fair